In a scattered rural village there lived an elderly woman called Evangeline who was known to prefer the company of animals to humans. She kept all number of domestic strays in her home and was equally fond of those still in the wild. But there was one creature, small and timid, that she held closer to her heart than all the rest.

One morning Evangeline found a tiny bat lying on the pavement as if it had dropped right out of the sky like a stone. It was a bitterly cold day and she quickly scooped the creature up and tucked her into the inside pocket of her coat. Here it remained nestled between the warm hills of Evangeline’s bosom. She named the bat Blondie and she decided that actually it would be safest to keep her tucked into her bra for as long as seemed to be necessary. This turned out to be a very long time.

Blondie found this intimate space to be sublime in every way. She soon grew accustomed to the soft drawing of breath and the steady beat of Evangeline’s heart so close to her own. It tapped out the days like a metronome and was a constant comfort. She soon came to recognise that there were only two things that dramatically changed the rhythm within… a steep flight of stairs and the rare sighting of a certain gentleman called Frederick Ferenz in his seal grey suit. The latter would send a flush of warmth that spread throughout Evangeline’s entire chest right up to her neck until it radiated across her cheeks, like ink on water. It was a delicious occurrence for them both, and one that Frederick was mighty pleased to encounter in his twilight years.

But the happiness that ensued was so fleeting for everybody.

Evangeline had lived for more than 90 years and her heart bore the weight of these years so stoically, until one day when it simply stopped.  Within a few hours the whole of Blondie’s world fell silent and her beloved nest was as cold as china.

By the time she came to live in The Field she had salvaged a collection of belongings that were able to bring some comfort from her grief. She slept inside a copper teapot that she decorated with her own dreamlike visions and stories. She hung the teapot from the branches of a barren fruit tree and by day she slept soundly there, wrapped in the folds of a pocket handkerchief that still smelled of orange blossom and Evangeline.

But by night she was ablaze with anger and passion and rage! She zigzagged the sky with a fistful of brushes and painted great flames of fury on every surface she could find. She painted buildings burning and oceans drying up… armies of extinct animals and whales calling to the heavens. The work was always anonymous and nobody believed that a creature no larger than a plum could be the artist. 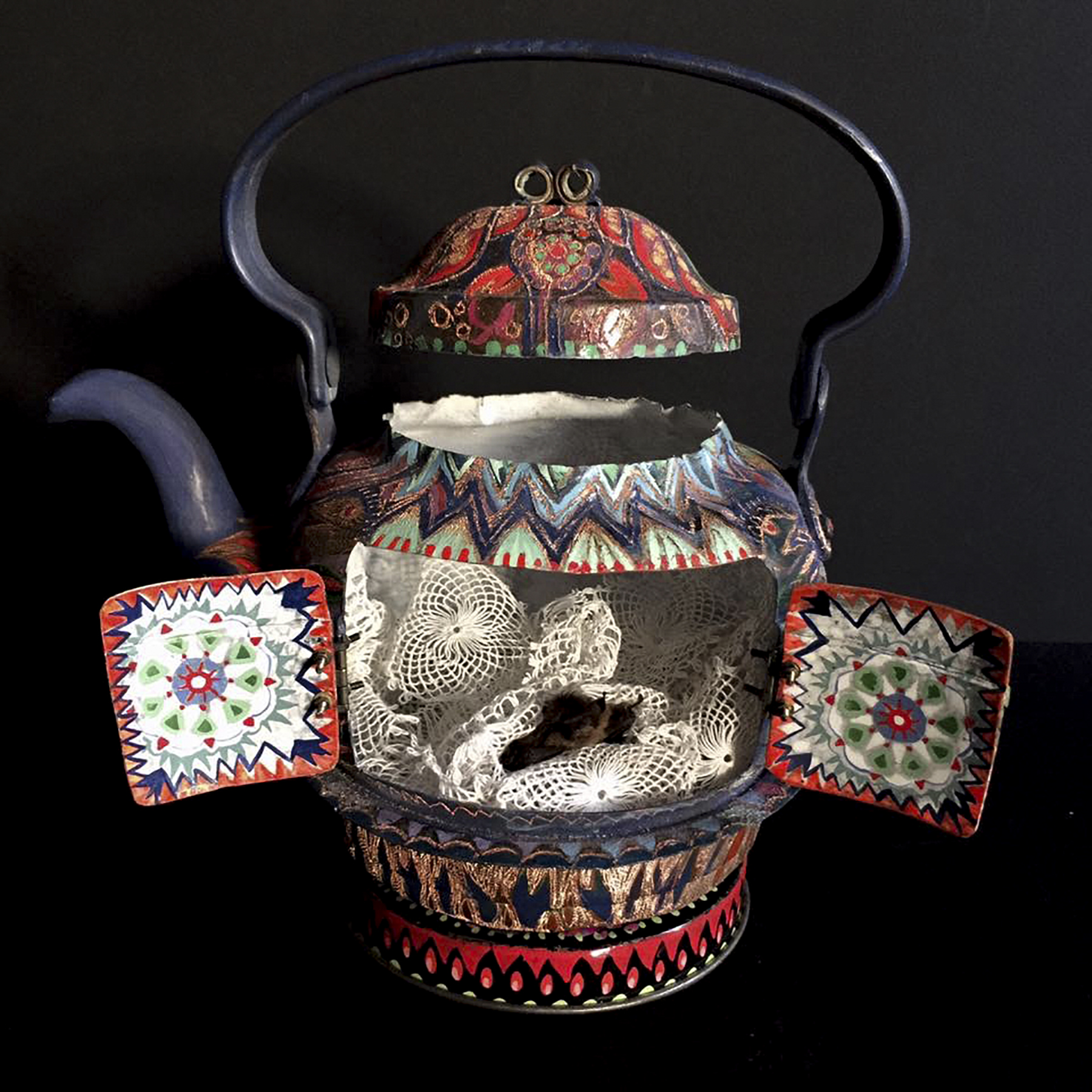