Thor and Marguerite were married shrews who liked to wear matching clothes and spend all their time with each other. They found it easy to enjoy everything they did together, even really dull things like buying onions and playing dominos. This harmonious life continued right up until the untimely death of the young Thor over the winter of their sixth anniversary together.

Following her husband’s death, Marguerite was so stricken with grief that she spent four days in a complete daze… as if everything had become white. When she finally managed to gather some thoughts she picked up the telephone and called two people; a local embalmer and a waxwork sculptor. She had formed a plan in her silence that she believed might really help her in her time of mourning.

First she sold her wedding ring to pay for Thor to be immortalised in the form of a lifelike wax sculpture. Then she sold her engagement ring to pay for him to be beautifully preserved in embalming oils. A week later she placed the waxwork sculpture into an open coffin filled with spring flowers, and held a very public funeral. She sat and watched the whole event from a carved wooden pew, with the embalmed body of her late husband propped up next to her throughout.

Everybody admired the beautiful ‘wax sculpture’ that sat beside Marguerite, and everybody thought it a fitting tribute to her wonderful husband, whom they burned on a funeral pyre piled high with scented wood. Nobody noticed that he burnt remarkably quickly.

Marguerite would live with her ‘sculpture’ for a whole year, talking to him just as if he were real. She served him dinner with a napkin placed under his chin and she cried with him on lonely nights. She would sit and talk for hours remembering all the opinions that Thor had shared with her and how they had opened up the world for her… seeing everything through his eyes. She would look at his eyes now and wish that they could open again just for a moment. On these days she would feel that life was intolerably cruel for taking away the one person she wanted to talk to more than anyone else… and that she was now completely alone.

One day Moltar, keen to offer his support, paid Marguerite a visit. He entered her modest apartment and sat with her while she served tea and his favourite Battenberg cake. He noticed that she found it difficult to sit still, and he had an immediate sense that something was amiss. He could see that this was no wax sculpture sat next to him on the couch and for one of the few times in his life, Moltar didn’t know what to say or how to act. He deliberately asked for more cake whilst he tried to come up with something helpful to say to this poor shrew. Eventually he stood up and thanked her sincerely for her hospitality, and then spoke in his softest voice, holding both her hands very gently “My love… one day you will find the strength to let go.” With that he left and he never returned. Even for Moltar, who had seen so much in his lifetime, and had grown so wise… this was an awfully disturbing situation.

Several months later residents of The Field learned that Marguerite had left one night with only a small suitcase. This was most out of character as she had never so much as ventured outside her garden gate before. It was always believed that she shared her husband’s fear of ‘getting lost’.

Over twenty years were to pass before something very curious happened. Some young mice were playing in the woods when they stumbled upon a very small door set into the stump of an old deceased tree. The door was jammed shut but they were able to peer through a tiny letterbox into a half-lit chamber within. There inside they saw what appeared to be a beautiful sculpture of a young shrew dressed in a knitted jumper and a pair of cowboy boots, surrounded by hundreds of dried flowers and berries, jewels and gems. There were all sorts of other objects surrounding him too: a pipe, a silk paisley bow tie, a yellow ukulele, some painted stones and nuts, vintage ‘Mariachi Mermice’ records, dominos, leather bound books and a lovely, well-worn red hat. But most peculiar were the hundreds of letters in mauve sealed envelopes stacked up high against the door, decorated with little kisses and poems and all signed ‘Marguerite’, in faded blue ink. The letters had been posted from all over the world and some must have contained seeds at some point, as beautiful flowers bloomed from their sleeves. 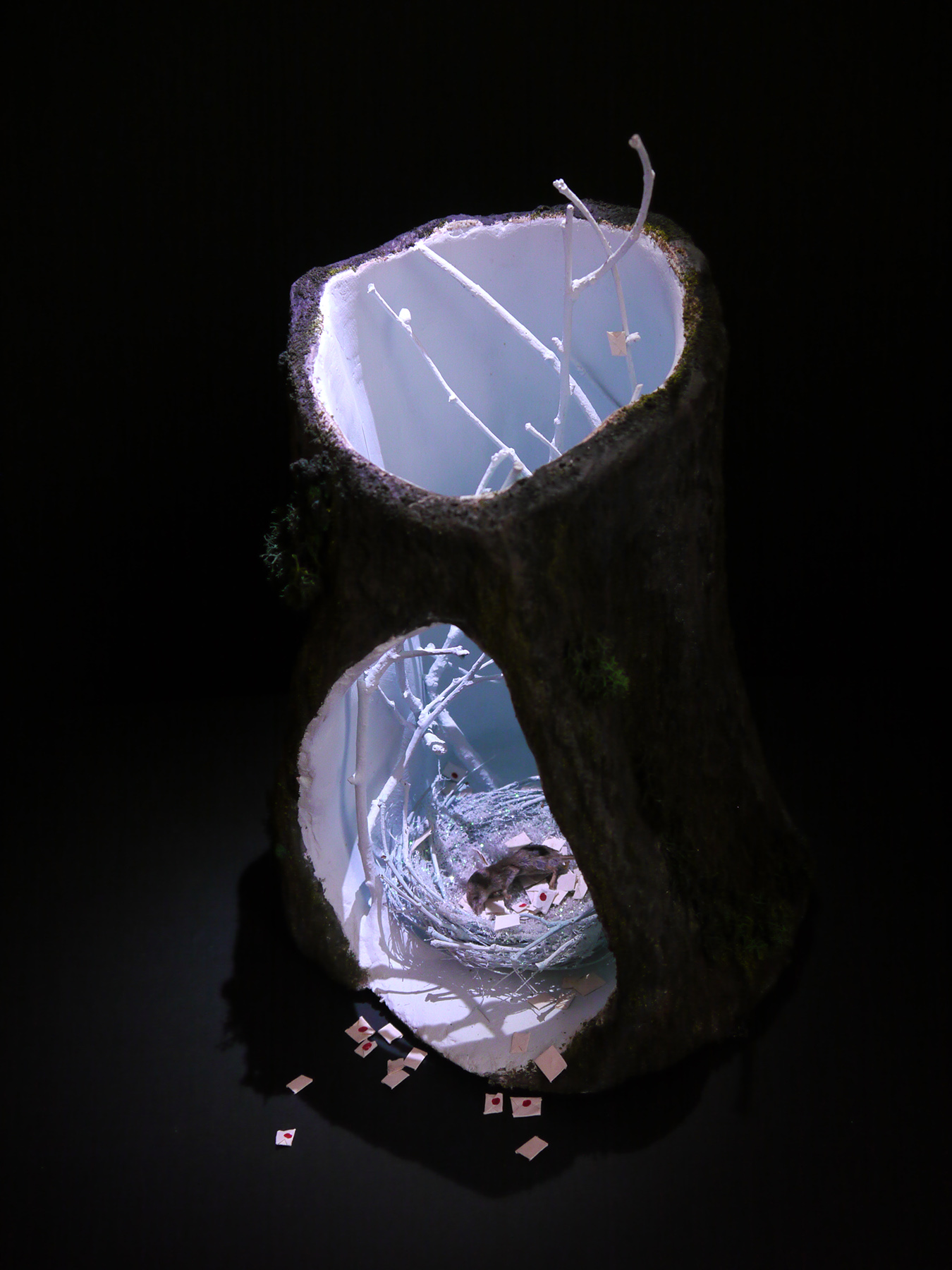 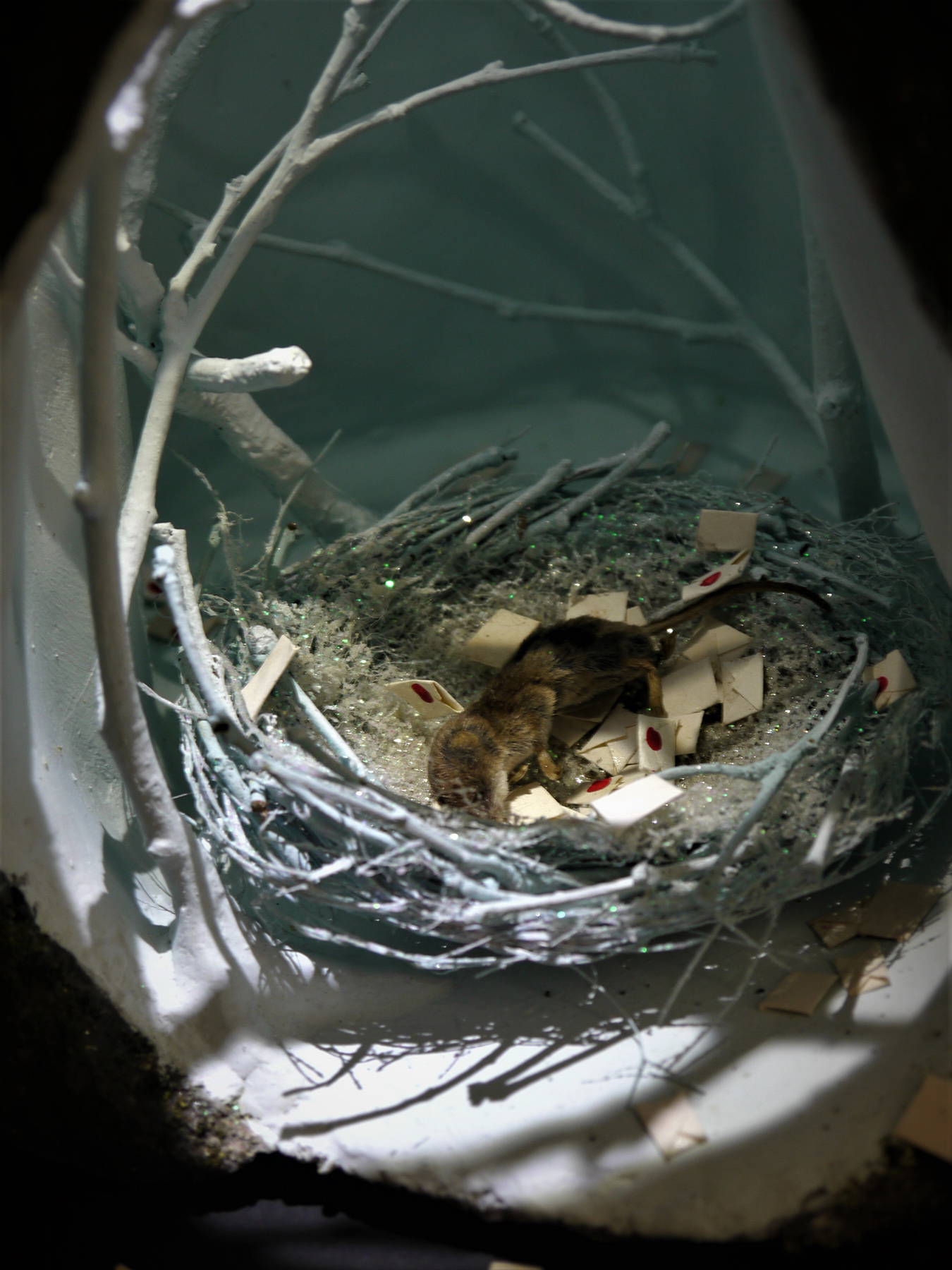